This walk takes you from the village of Tickton to the Leven Canal, using public footpaths along the River Hull. The route links the two East Riding villages using flat, waterside paths with nice countryside views on the way.
The walk starts just to the east of Tickton where you can pick up the paths along the river. Follow the path on the eastern side north for about 2 miles and you will come to the Leven Canal. This runs east for just about 3 miles, taking you into Leven.
The canal was in 1805, and remained in use until 1935. It is now a Site of Special Scientific Interest. It includes an aqueduct at Sandholme Farm, which carries the canal over a drainage ditch which was already in existence when the canal was built. It is grade II listed and is largely constructed from red bricks, and has three segmental arches.
To continue your walking in the area you could try our River Hull Walk, which starts in Beverly and explores the Beverley Beck before heading to Tickton.

After your walk head to the New Inn at 44 South St in Leven (postcode: HU17 5NZ). The popular, family run pub has a good menu and selection of beers.

Head south west and you could visit the neighbouring villages of Cottingham and Skidby. The main attraction here is the Grade II listed Skidby Mill which dates back to 1821. The working mill includes an interesting museum and a fine restaurant with a landscaped garden.
For more walking ideas in the area see the Yorkshire Wolds Walks page.

Leven Canal . Seen here at its eastern end, south of the village. The three and a quarter mile long canal links Leven with the River Hull. It operated between 1805 and 1935 but is now closed to traffic and designated a Site of Special Scientific Interest.

Leven Canal at Sandholme. Looking east along the canal towards the small caravan park on Sandholme Lane.

This westerly end of the canal is more overgrown than the eastern section - providing at least plenty of nesting materials. 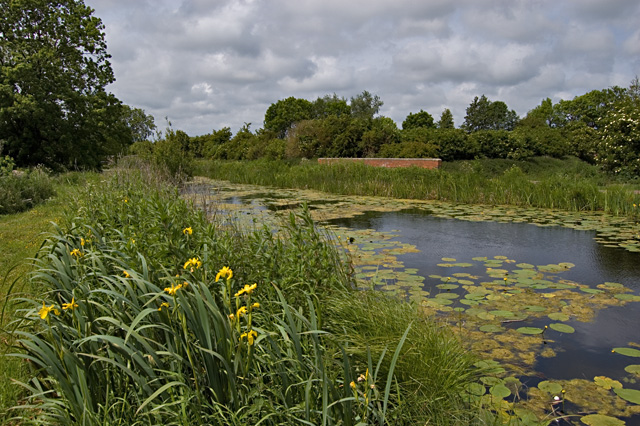 The brick parapet visible in the centre of the picture is where the Leven Canal crosses over the Burshill and Barff Drain.