This literary trail explores an area of the Ribble Valley thought to have inspired some of the landscapes from J.R.R Tolkien's 'Lord of the Rings' trilogy. The walk also visits Stonyhurst College where the author worked on the novels during the second world war.  Connections to the books include 'Middle-earth' representing the local area, Shire Lane in Hurst Green and the 'River Shirebourn' (the Shireburns built Stonyhurst).
The walk starts at the village of Hurst Green where you follow a footpath south to the River Ribble. Here you pick up a nice waterside section of the Ribble Way, taking you past Winckley Hall, Cromwell Bridge (Oliver Cromwell, spent the night at Stonyhurst on his way to the battle of Preston in 1648) and Lower Hodder Bridge. Here you pick up a section of the River Hodder to take you toward Over Hacking. The route then leaves the river to follow woodland trails and country lanes to Stonyhurst. The college was founded in 1593 and includes several find old buildings, attractive grounds and public gardens with fine views to the Forest of Bowland and Pendle Hill. Notable buildings include the 19th century Dome Observatory, the medieval Hill Barn Farm and two elegant 17th century Garden Pavillions.
After exploring the college the route passes through Fox Fall Wood before returning to Hurst Green.
It's easy to extend your walking in the area by continuing along the Ribble Way trail in either direction. Heading north east will take you to Clitheroe where you can explore the castle and its attractive grounds. Heading west along the river will soon take you to the interesting Roman village of Ribchester where remains of the old Roman Fort can still be seen. 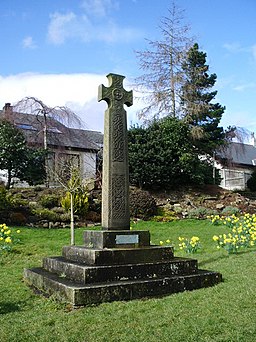 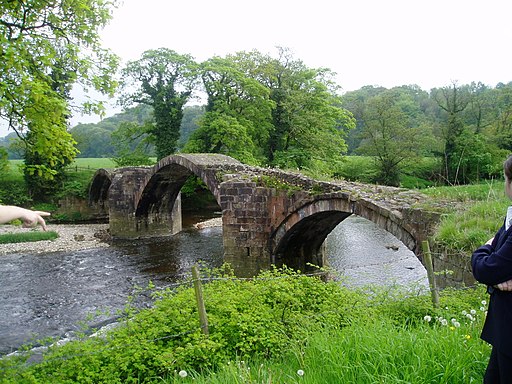 Cromwell's bridge on the River Hodder

Mitton Wood and the River Ribble 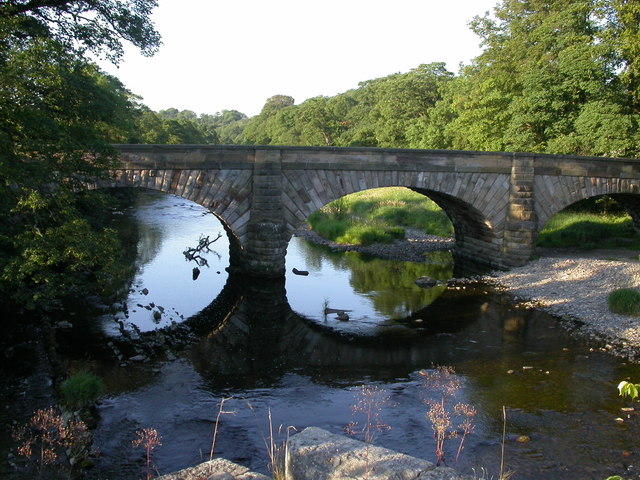