Follow the rivers Ver and Colne on this waterside walk through Hertfordshire.
The walk starts at Redbourn and follows the River Ver to the historic town of St Albans with its impressive cathedral and the delightful Verulamium Park.
This section of the walk passes along the lovely lake in the park which also has a fascinating history stretching back 2000 years. It is named after the Roman city of Verulamium on which it now stands. Near here you will also find the Watercress Wildlife Site, a pretty riverside nature reserve. The site has a wide variety of wildlife, including water rails, kingfishers, little grebes and muntjac deer.
The path then continues south, joining the river Colne for the final stretch into Watford.
This walk has much to enjoy including, lakes, weirs and numerous species of river dwelling wildlife.

In the pretty village of Redbourn there's a couple of good options. The Hollybush dates from the 16th century and does a fine Sunday roast which you can enjoy in the nice garden area to the rear. You can find them at postcode AL3 7DU.
There's also the Cricketer's which is in a lovely spot overlooking Redbourn Common. They also serve high quality food and can be found at postcode AL3 7ND. Both pubs are also dog friendly if you have your canine friend with you.

On the northern outskirts of St Albans there's miles of good cycling and walking trails to be found around the Heartwood Forest near Sandridge. 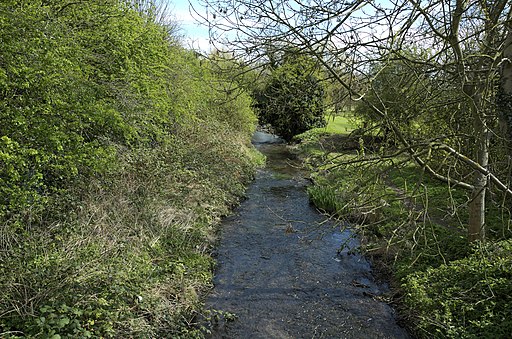 The River Ver at St Albans east of Cottonmill Lane.

Redbournbury watermill. This mill was rebuilt completely after a fire, and now once more mills wheat to make flour, although the lack of water in the river Ver means that it now uses electricity rather than waterpower