Follow the Wakefield Branch of the Aire and Calder Navigation Canal from Wakefield to Castleford on this waterside walk in West Yorkshire. The towpath is quite open for much of the way so there are nice wide ranging views of some beautiful countryside to enjoy. The route finishes at Castlefield railway station so you can return easily by public transport.
Cyclists can enjoy the section of the canal from Southern Washlands to Altofts.
The walk starts on the River Calder in the centre of Wakefield, near Kirkgate railway station. Follow the river east and then north and you will soon come to the canal and the Southern Washlands Nature Reserve. The pretty canal passes right past the reserve which has a series of lakes and lots of wildlife to look out for. Cyclists can pick up the towpath here too.
The route continues to the notable Stanley Ferry Aqueducts. The impressive Victorian structure was built in 1839 to take the Aire and Calder Navigation over the River Calder. The more modern one was built in 1981.
After passing the aqueducts the canal bends round to the east, passing Altofts and Whitwood before coming to Castleford.
Part of the route follows the long distance Trans Pennine Trail. You can use the trail to extend your walking in the area to the north of the canal and the River Calder.
Just to the south of Wakefield you can enjoy more waterside trails around Pugneys Country Park.
To continue your canal walking head south to the Barnsley Canal which runs from Walton to Royston.

The popular Wakefield Wheel Cycle Route uses a section of the canal near Altofts and Stanley. The 38 mile circular route visits several of the local highlights, using a waymarked trail. It's a great way of exploring the rivers, canals, parks, woods, lakes and countryside around the town.
The Walk around Wakefield visits three local parks with easy surfaced footpaths taking you to rose gardens, a conservatory, a lake and an aviary. 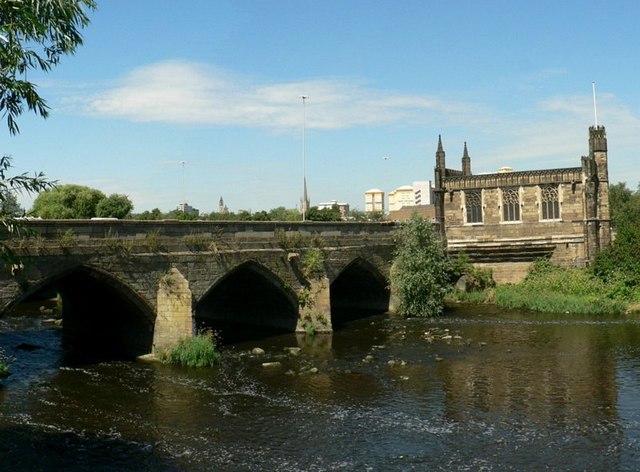 Wakefield Bridge and the Chantry Chapel