This walk explores the Oxfordshire village of Wroxton and the splendid grounds of a fine Jacobean mansion.
The walk starts off in the pretty village where there's a pond and lots of old Cotswolds cottages to admire. You can then follow a public footpath through the college and abbey grounds to the nearby obelisk. Continue north west and you will soon come to the neighbouring village of Drayton.
It's a beautiful area with a serepentine lake, lawns, woodlands, a cascade and a number of follies. The house itself also has a fascinating history having been built in the 17th-century on the foundations of a 13th-century Augustinian priory. It is also notable as the former residence of Lord North, who was the Prime Minister during the American War of Independence.

OX15 6PU - Please note: Postcode may be approximate for some rural locations

In Drayton you could stop off for refreshments at the Roebuck Inn. This traditional village pub is over 400 years old and has an interior full of characted. They also do good food and have a decent selection of ales. You can find the pub in Drayton on Stratford Road with postcode OX15 6EN for your sat navs.

Head east into Banbury and you can continue your walking along the Oxford Canal Walk. There's also Grimsbury Reservoir and Spiceball Country Park to visit in this area.
Just to the south you will find Broughton Castle. There's a moated manor house here with good footpaths running across the surrounding grounds.
For more walking ideas in the area see the Cotswolds Walks and Oxfordshire Walks pages.

Wroxton Abbey grounds. In the middle years of the eighteenth century Lancelot Brown remodelled the gardens making use woodland and water in his characteristic personal style. The classic features included a lawn sweeping up to the house, clumps of trees, a serpentine lake and an encircling tree belt and carriage drive, also showing a serpentine geometry. This is the style of what is often known as the 'English landscape garden', or possibly even the 'Brownian' style. 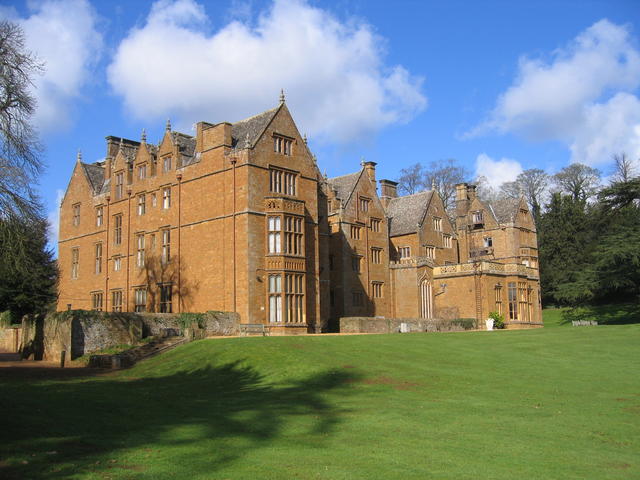 Wroxton Abbey photographed in March 2007. William Pope built first part of a Jacobean mansion here on site of an Augustinian priory, known as Wroxton Abbey, in about 1618. The leasehold passed through marriage to the North family who lived here until 1932. Lord North (1732-1792), best known as the Prime Minister who lost Britain's American colonies, was born here. Today is owned by the Fairleigh Dickinson University from New Jersey in the USA (interesting touch of irony given previous owners!) and now known as Wroxton College and is featured in their "Study Abroad" programme. 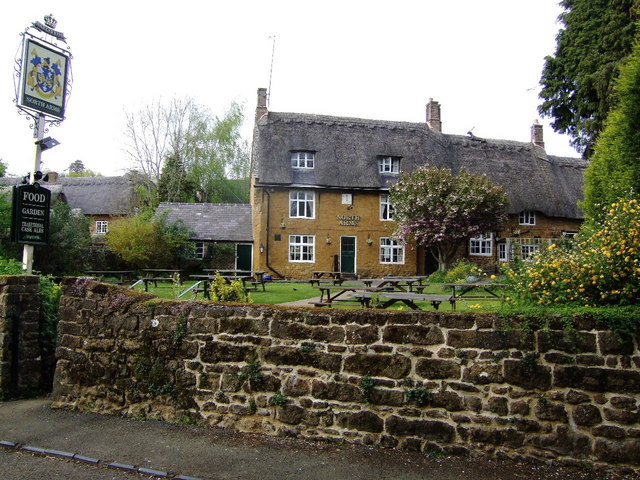 The North Arms, Mills Lane, Wroxton, seen from the south. When this photo was taken the pub was controlled by Greene King Brewery. 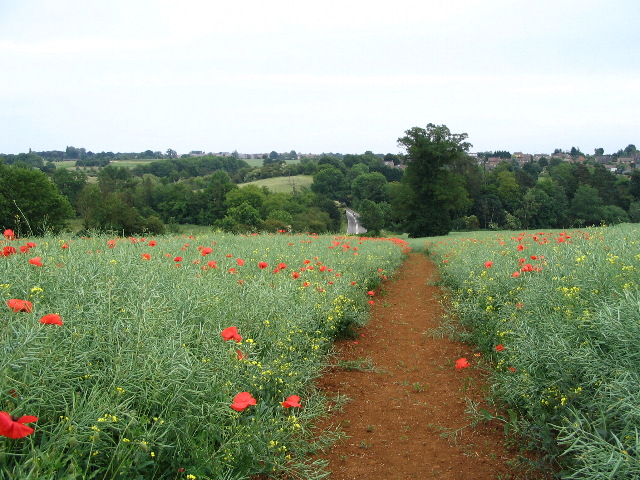 Footpath between Wroxton and Drayton. Looking towards Drayton, the footpath drops down through the field of oilseed rape with a smattering of poppies to join the A422 by the bridge over the stream (hidden in the dip). The A422 can be seen rising up the slope on the other side. The houses on the skyline are in Drayton.

Village Pond, Wroxton. The village pond in this picturesque north Cotswold Village, complete with a thatched house for the ducks!

Gardens of Wroxton Abbey with a recently restored walkway and portico.

Tower of All Saints' parish church (centre left) and dovecote of Wroxton Abbey (centre right). Sanderson Miller designed the church tower and may have designed the dovecote.

17th century Guide Post just outside Wroxton. An inscription on one face reads ‘First given by Mr Fran White in the year 1686’.