Follow the Wychavon Way through the Worcestershire countryside on this splendid 40 mile walk.
The walk begins at the town of Droitwch Spa, where you can pick up the waymarked trail just to the east of the town centre and train station. You start of heading east along the River Salwarpe before turning south to Hadzor.
The route then heads through the countryside to Goosehill Wood, Earl's Common, Flyford Favell, Abberton and Church Lench. This section includes a short stroll along the Worcester and Birmingham Canal and woodland walks through Grafton and Old Yew Hill Woods.
At Craycombe Hill you turn west to head through Craycombe Woods towards Wyre Piddle. Here you follow the River Avon to Pershore and Great Comberton. There's nice riverside sections to enjoy here with rushing weirs and lots of wildlife to look out for on the way.
The next section takes you past Banbury Stone Tower which is the high point on the walk. There's splendid views over the Cotswolds countryside from the elevated position of the tower.
From the tower you descend to the east, toward Ashton Under Hill and Cropthorne whose church dates back to the 12th century. You'll also pass Bredon Hill near Ashton under Hill where you can visit the Iron Age Hill Fort of Kemerton Camp and a small stone tower known as Parsons Folly at the summit.
The final section then runs from Ashton to Sedgeberrow and Ashton Somerville before finishing in the popular Cotswolds village of Broadway where you can enjoy a visit to the splendid Broadway Tower Country Park.

In the village of Broadway you could stop off for a bite to eat at The Broadway Hotel. The hotel is in a lovely spot on the quaint village green, alongside beautiful boutiques and honey-coloured cottages. It includes a brasserie and a racing themed bar, inspired by the nearby Cheltenham Racecourse and its famous Gold Cup. The Broadway dates all the way back to 1575 and also has a fine garden area to relax in on warmer days. It also provides good quality accommodation and can be easily found on the High Street in the village at a postcode of WR12 7AA.
The Star Inn in Pershore is a riverside pub in a great location. The historic pub is set in a fine 15th century coaching inn and does excellent food. There's a snug interior and a lovely beer garden right next to the river for warmer days. You can find the inn at 23 Bridge Street with a postcode of WR10 1AJ for your sat navs.
In Elmley Castle there's a historic pub to visit in the shape of the Queen Elizabeth Inn. It's a pub of some note, dating from the 16th century and named after the famous monarch who is reputed to have stayed there. According to local legend Elizabeth I was presented with a hat on her arrival in the village on the road from the nearby town of Pershore. It is thought the Queen and her entourage stayed for two nights as guests of William Savage. They have a lovely interior with timber beams, an original flagstone floor and a roaring log fire in the winter. Outside there's a patio and a small garden area for warmer days. They do high quality food and can be found at Main Street with a postcode of WR10 3HS for your sat navs. The village of Elmley Castle is one of the highlights on the route and well worth a short stroll if you have time. It's one of the prettiest in the county and includes delightul old cottages, a village pond and an historic church dating from the 12th century.
In Ombersley there's the ancient King's Arms. The handsome timber framed pub dates back to the early 15th century and has historical connections with King Charles II. They serve good quality food and can be found at postcode WR9 0EW for your sat navs. Ombersley is also worth exploring with a number of interesting timber framed properties and the historic Ombersley House Estate to see. 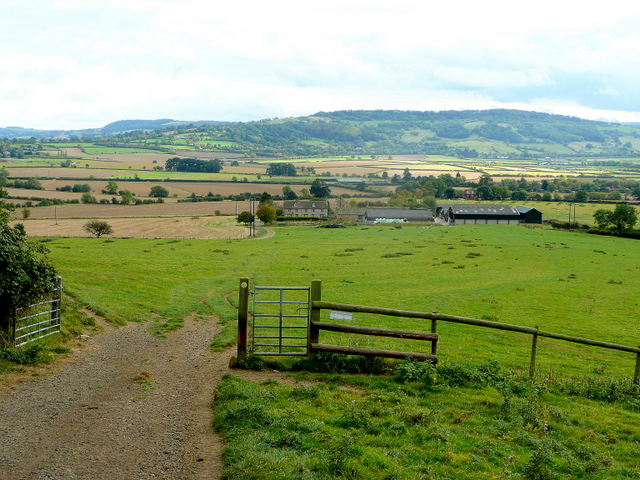 Looking over Frampton Farm towards Langley Hill near Winchcombe. Entering Dumbleton Estate land on the southern flank of Alderton/Dumbleton Hill. 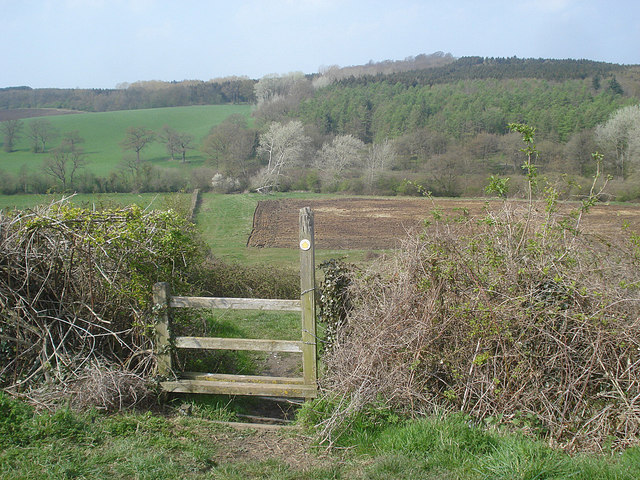 The path crosses the Whitsun Brook valley ahead then follows the edge of Old Yew Hill Wood up the other side before entering Yeald Wood on the hill.

Looking south down the dry valley on the southern flank of Alderton Hill.

Site of Elmley Castle. The village takes its name from a castle which once stood on high ground above the present village. Viewed here from the northern slopes of Bredon Hill all that remains are earthworks which are clearly visible here. The castle was built by Robert le Despenser in the late 11th century and was for a time the principal seat of the Beauchamps. By the late 15th century the castle had been demolished. 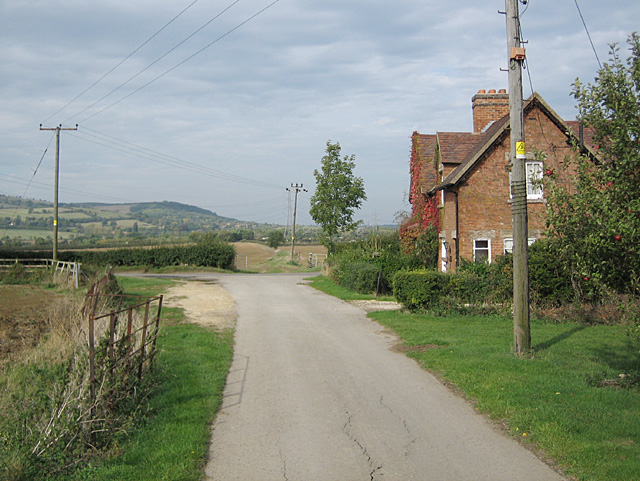 Didcot Cottages. Looking north along the Wychavon Way, Ashton-under-Hill visible in the distance on the slopes of Bredon Hill

Entering Ferndown Woods. Looking south-east as the path meets the wood. Both the large and small signs remind people to keep dogs on a lead. The small one politely reminds us to keep to the footpaths and indicates that dogs might scare the deer resident in the wood. Although the map only shows this as Yeald Wood, the sign calls this area 'Ferndown Woods'.

Approaching Church Lench. Looking northwards along the track to the outskirts of the village. The 42-mile Wychavon Way links Holt Fleet (north of Worcester on the Severn) to the Cotswolds, passing through many pretty Vale of Evesham villages like this one, and finally linking to the Cotswold Way at Winchcombe. This gentle walking route was originally opened in 1977 to commemorate the Silver Jubilee of Elizabeth II. 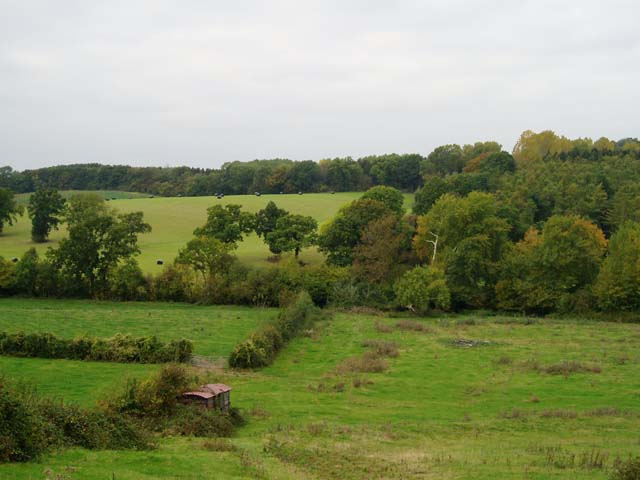 Church Lench countryside view. The footpath goes down the hill and crosses the Whitsun Brook in front of Old Yew Hill Wood.