Explore this limestone headland in Llandudno and enjoy spectacular views of the North Wales coast on this circular walk. Waymarked trails take you around the park where there are views of Liverpool Bay and the Irish Sea, the Carneddau mountains, the Menai Strait and Anglesey. You can also climb to the summit of the park or catch the Great Orme Victorian Tramway and Cable Car to get there.
The area is geologically significant with limestone and dolomite rock formations dating from between 339 and 326 million years old. It's also great for flora and fauna with lots of lovely wildlfowers such as pyramidal orchid, common rockrose and wild thyme carpeting the grassland. Also look out for the Kashmiri goats grazing on the slopes of the headland. The 200 strong herd, has roamed the Orme since the middle of the 19th century. They're descended from a pair of goats that were presented by the Shah of Persia to Queen Victoria shortly after her coronation in 1837.
The North Wales Path long distance trail runs around the park. You can extend your walk by picking up the trail and heading south east toward Llandudno and Little Orme. Great Orme's little brother is not as well known but is a another splendid coastal headland with fabulous views over Penrhyn Bay. It's also a great place for wildlife with bredding fulmars and seals in Angel Bay.
Heading south along the coast path takes you past the lovely Conwy Sands to Conwy.

LL30 2XF - Please note: Postcode may be approximate for some rural locations

Near the northern tip of the headland there's the splendidly positioned Rest and be Thankful cafe. There's a good range of meals and snacks with great views from the cafe's cliff top location. You can find them at Marine Drive, LL30 2XD.

The park is ideal for a bracing dog walk. You'll probably see other owners with their pets on a fine day. The cafe mentioned above is also dog friendly.

If you follow the North Wales Path south from the park you could visit the interesting town of Deganwy. Here you'll find a south facing beach, a contemporary marina, an attractive quay and the ruins of the historic Deganwy Castle. 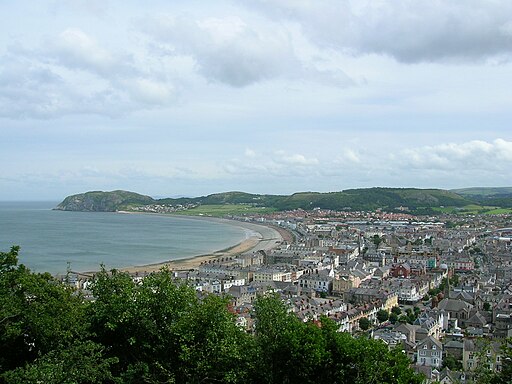 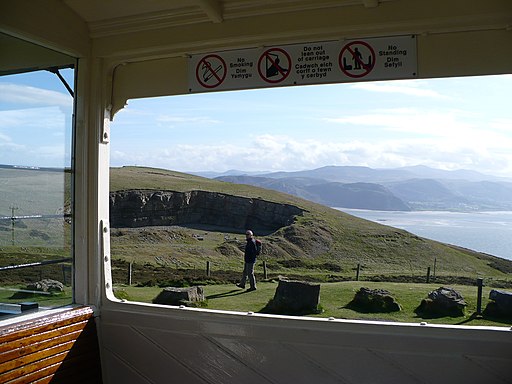 Great Orme Quarry. View of an old quarry, taken from the tram.

Goats on the headland. The Kashmiri goats kindly posed in front of the sign for the Great Orme Country Park and Nature Reserve, although I think they were more interested in eating grass. 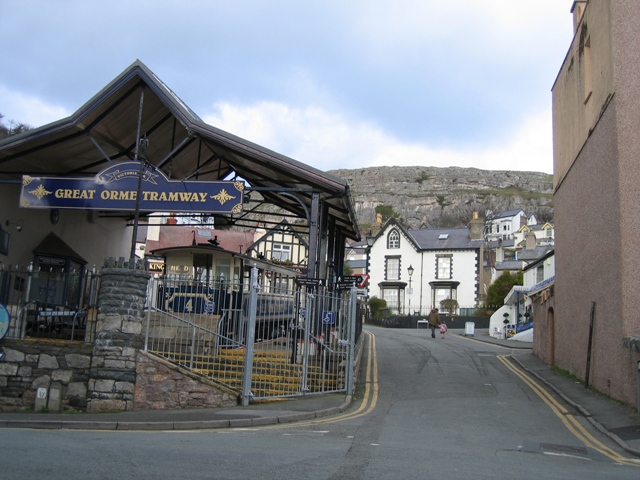 A grassy footpath at the site. Looking down a steep footpath from the top of the cliffs far above the remains of the Coastal Artillery School. A small section of the Marine Drive can be seen on the left, complete with car, and just to the right of that, and further down again is the tarmac area that is adjacent to the remains of the school. 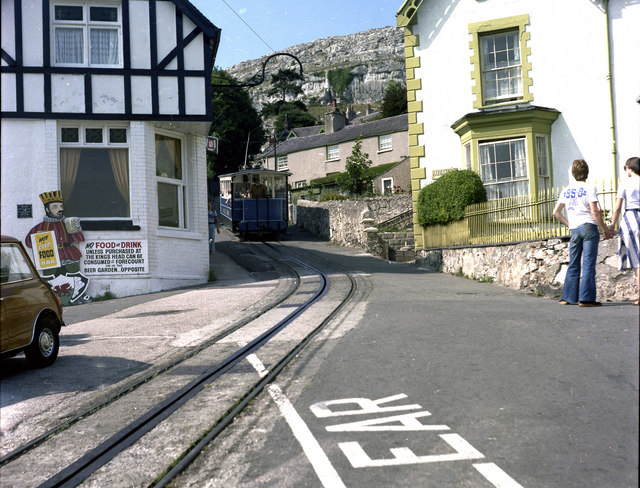 This shows a car of the Tramway descending towards the lower terminal, Victoria station. This line is unique in Britain as a street-running funicular, (though there are examples in Portugal and elsewhere).

South west side of the headland with a sea view.