This Cheshire based town is in a good spot for walking with canal paths, two local rail trails and some decent waymarked countryside trails running through the surrounding area.
This route uses the Salt Line and the Trent and Mersey Canal to create a circular walk around Alsager. On the way you'll enjoy easy surfaced trails, canalside footpaths and pay a visit to the historic Rode Hall.
The walk starts just north of the town centre at Bridge Farm where you can pick up the Salt Line around Lawton Heath End. Follow the shared walking and cycling path north west and it will take you up to the canal around Hassall Green. You can then follow the towpath east past Roughwood Farm to Thurlwood and Rode Hall. This fine Georgian country house is a lovely place for a stroll. It's well known for its winter snowdrop walks and includes parkland, woodland, gardens and a large lake.
After exploring the park you can then cross the canal and pick up other footpaths and country lanes to take you back to the start point. You can extend this walk by continuing south east along the canal for about a mile to visit Lawton Hall where there is a public footpath running past the estate's lake.

The Wilbraham Arms is nicely located on the route next to the Salt Line. The pub takes its name from the prominent local family that owned the nearby Rode Hall. It is positioned on the site of a former Cheshire farmhouse and includes extensive grounds, with two separate drinks terraces as well as a lawn seating area. It's a lovely place to relax in the summer months and can be found at a postcode of ST7 2AX.

The walk is a nice one to do with your dog and The Wilbraham Arms mentioned above is also dog friendly. In Rode Hall you are requested to please keep them on leads.

Head north west along the canal and you can pick up another rail trail near Sandbach. The Wheelock Rail Trail is another flat surfaced path providing easy walking opportunites in the area.
One of the walking highlights of the area is the nearby Mow Cop which has strong connections to Rode Hall. Here you'll find Mow Cop Castle, an 18th century folly regarded as one of the landmarks of the area. The folly was built in 1754 by Randle Wilbraham of Rode Hall as a summerhouse and last restored in 2003. From the elevated position of the castle there are splendid views over the canal and the surrounding countryside. You can pick up the circular walk a few miles east of the town. Also near here you'll find the Macclesfield Canal just north of Kidsgrove.
Just to the west of the town you can pick up a couple of waymarked long distance trails. Both the Crewe and Nantwich Circular Walk and the South Cheshire Way can be accessed around Winterley and Hasslington. You could head south to Hough, Weston and the Wybunbury Moss National Nature Reserve where there are good wildlife spotting opportunites.
For more walking ideas in the area see the Cheshire Walks page.

View of the Salt Line. This rail trail is now a linear nature trail and cycleway starting near to the Wilbraham Arms in Alsager. It follows the old mineral line from the Potteries through to Sandbach and the salt towns of S Cheshire. Coal and limestone was carried into Cheshire where brine was heated in large open pans to leave white salt crystals which were then used in the making of washing soda, glass, soap and detergents. The trail is now in the ownership of Congleton Borough Council.

Milton Park. Taken from the Station Road entrance looking towards Milton House. The park is a nice place for a stroll in the town centre. There's a rose garden, floral displays and an ornamental lawn area. You can find the park at postcode ST7 2ES for your sat navs.

Grazing Land and Woodland near Alsager. Taken from the towpath by Lock No 49, on the Trent and Mersey Canal.

Walkers on the towpath near to Rode Heath. Betchton - the South Cheshire Way following the towpath of the Trent & Mersey Canal just east of Chell's Aqueduct. 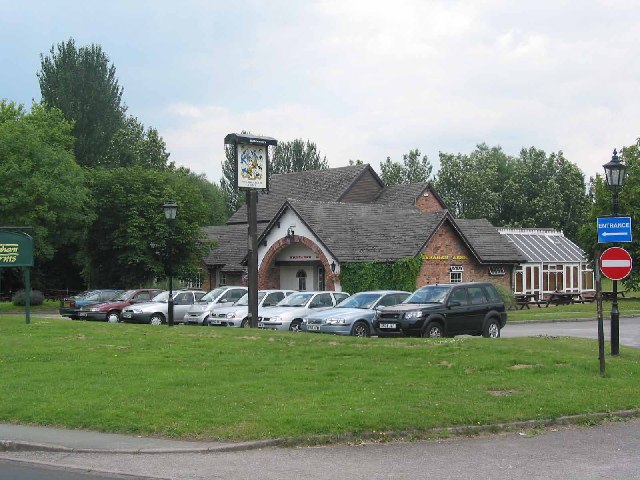 Wilbraham Arms Alsager.  The first pub as you enter Alsager from the M6 at Sandbach. Built on the site of Cresswellshawe Farm and named after the Wilbraham family major landowners of part of Alsager in days gone by.