This long circular walk uses a mixture of waymarked footpaths and minor roads to take you to some of the highlights of the city. You'll visit interesting historical locations, various attractive parks, two areas of common land and also enjoy waterside stretches along the River Sherbourne which runs through the city.
The walk starts at Coventry Cathedral in the city centre. The new cathedral sits beside the ruins of the old 14th century cathedral which was bombed in the suring the Second World War. From here the route picks up the Sherbourne Valley Way waymarked trail to take you south east along the River Sherbourne to Lower Stoke and Whitly Common.
You then pick up a section of the A Coventry Way Circular Walk to take you north west through Stivichall to the War Memorial Park. The large park was opened in July 1921 as a tribute to the 2,587 Coventrians who died between 1914 and 1918 fighting in the First World War. It includes the 90 feet (27 m) high war memorial monument which is the most prominent construction in the park. There's also large open green areas with many trees and shrubberies.
After exploring the park the route continues north west to visit Hearsall Common. The larger eastern section of the common is a large open area of mowed grass that attracts dog walkers, sunbathers and kite flyers. The common includes nice woodland areas, a nature reserve and lots of wildlife to look out for.
After leaving the common the route heads east through Spon End to return to the cathedral, where the walk finishes.
To continue your walking around the city pick up the Coventry Canal near the Cathedral and follow it north toward Bedworth. You could also pick up the Coventry Way which takes you through the countryside surrounding the city. It also visits the nearby town of Kenilworth with its impressive castle.
The Brandon Marsh Nature Reserve and the woodland trails at Brandon Woods can be visited from the suburban village of Binley Woods, just to the east.

To the west of the city there's the villages of Berkswell, Hampton in Arden and Balsall Common to visit. The former is particularly noteworthy with its Norman church, Grade II listed 16th century inn and the Berkswell Windmill which dates back to 1826. The epic Heart of England Way can also be picked up in this area.
For more walking ideas in the area see the Warwickshire Walks page. 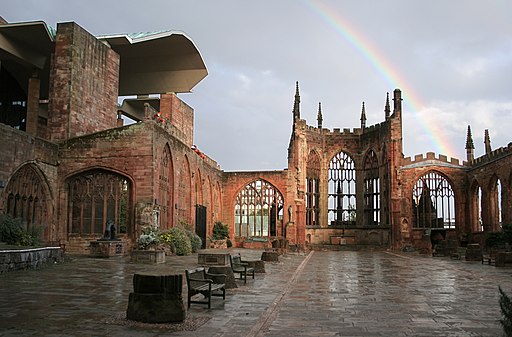 River Sherbourne, Coventry, near the Charterhouse

Showing the arch of the road bridge over the River Sherbourne in Whitley, 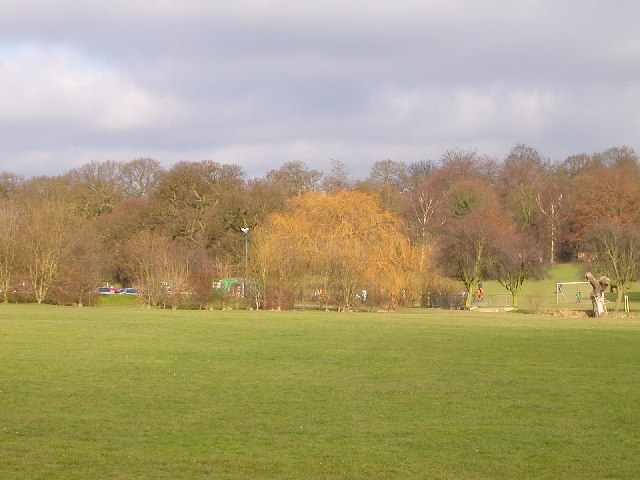 War Memorial Park, Coventry, England. Over a bank the tops of cars are seen in the main car park. 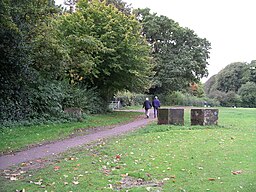 War Memorial Park. Concrete blocks in the park near to Coat of Arms Bridge Road that were once used to secure barage balloons in the second world war. Several have been removed and these three are the only remaining ones. 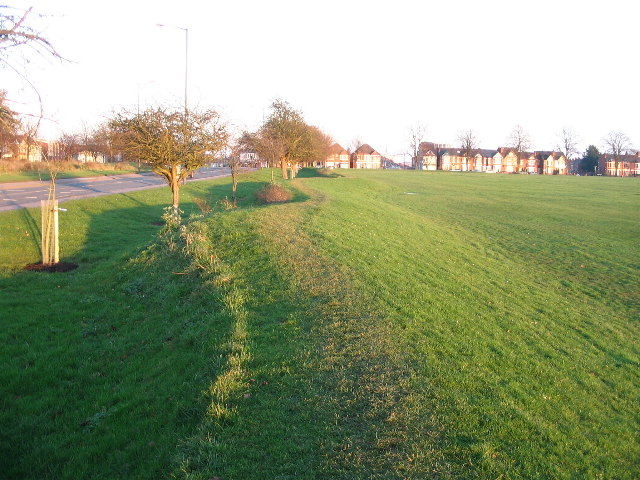 Hearsall Common. The earth embankments surrounding the common, built to prevent parking on the area. Used as a means of keeping your feet dry when choosing not to walk next to the traffic on Hearsall Lane (B4101, left). The houses on the horizon are on Earlsdon Avenue North.

Hearsall Common, maples Maples line the footpath between Tile Hill Lane and Canley Lane at the edge of Hearsall Common. In the summer they cast a bit too much shade over the path but make up for it in autumn.