An easy walk from the village of Knipton to Branston, passing Knipton Reservoir on the way. The route follows a lovely country lane with views of the beautiful Vale of Belvoirácountryside.
The walk starts in the pretty Leicestershire village of Knipton, on the border of the Belvoir Castle Estate. In the village there's some pretty 19th century cottages built for the estate and a Grade II listed church with a 13th-century tower.
You can follow Branston Lane south towards Branston. At Croxton Lodge you turn right to follow a footpath past the southern end of the reservoir into Branston. There's some nice views of the River Devon and the reservoir before coming into the village. Here you will find several interesting Grade II listed buildings including 18th-century farmhouses, the early 19th-century Old Rectory,áa Village Hall dating from 1843 and the parish church which originatesáfrom the 13th century with alterations up the 15th.
To extend your walking in the area head north and explore the Belvoir Estate on our Woolsthorpe and Belvoir Castle Walk.
Also nearby is the pretty Denton Reservoir where you enjoy nice grassy paths around the water before picking up the towpath of the Grantham Canal.

Farmland above the reservoir 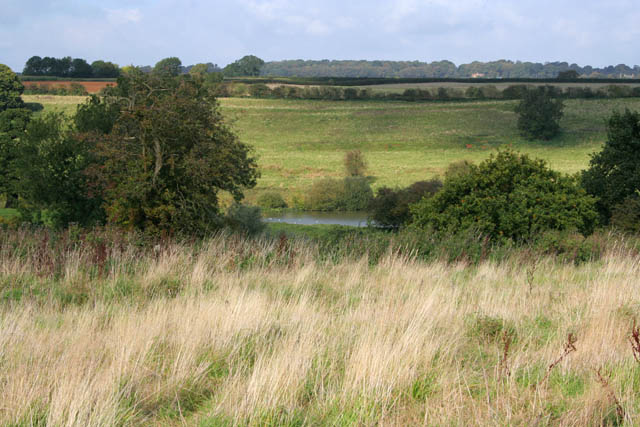 Farmland to the north of Knipton Reservoir