Follow the Limehouse Cut canal on this waterside walk or cycle in East London. It's a nice route for anyone looking for an easy, safe cycle ride or walkers looking for a pleasant stroll in the city. Look out for wildlife including coot, swans, ducks and cormorants on the way.
The route starts from the Limehouse Basin, next to the River Thames in the London Borough of Tower Hamlets. Here you can see the road swing bridge at the entrance to the Thames. When tall masted boats either arrive or leave the basin, Narrow Street traffic is stopped. From the basin you follow the Lea Valley Walk north east along the canal through Bow Common, Bromley and Bow. The cycle route finishes at 3 mills studio but if you are on foot you can continue along the River Lea Navigation to the Olympic Park where you can explore the site on a number of footpaths and cycling trails. You could also continue along the Lea Navigation and visit the nearby Hackney Marshes just to the north of the Olympic Park.
At the stadium the Hertford Union Canal heads west to Victoria Park. This is another good option for extending your exercise.

For cyclists Cycle Superhighway 3 passes Limehouse Basin. The popular trail runs from Lancaster Gate to Greatfields Park in Barking, passing several of the city's highlights on the way. You could follow it to nearby St James's Park and Hyde Park where there are some lovely traffic free paths to follow. 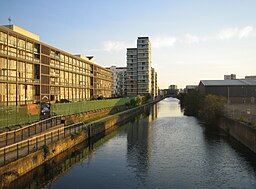 At the A12 bridge 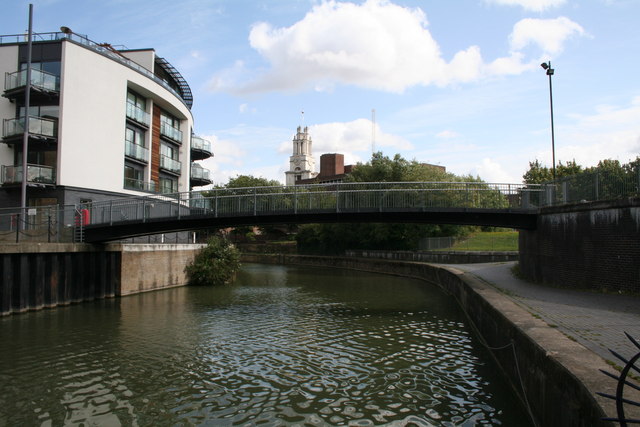 Footbridge over the canal