This pretty little village in the Norfolk Broads has some lovely waterside walks to try.
There's also two nature reserves where there's good wildlife watching opportunites. The village is notable for its mediaeval bridge and the Church of St Nicholas which dates from the 12th century. It's Grade I listed and well worth some investigation.
This walk from the village visits Hickling Broad before heading along the River Thurne to the neighbouring village of Thurne.
The walk starts in the village and follows country lanes and footpaths north east to Hickling Broad where you pick up the Weavers' Way. You can then follow the waymarked trail south east along Heigham Sound to the river. The route then heads west towards the noteworthy Heigham Bridge which dates from the 15th century. Near here you'll also find the Herbert Woods marina which was the first in the broads.
The route continues south west past Bastwick and Womack Water to the little village of Thurne. Here you'll find the Lion Inn where you could stop for refreshments before the return leg of the walk. There's also the picturesque Thurne Windmill to visit in the village. The mill dates from 1820 and is still turning today.

Head east and you could visit the National Trust's Horsey Windpump and Horsey Mere. Here you'll find easy circular walks taking you to the interesting old drainage windmill and around the pretty mere.
Also to the east is the delightful village of Winterton on Sea. There's much to enjoy here with village features including a lighthouse, pretty cottages, unusual roundhouses and a fine 17th century pub. The area also includes the noteworthy Winterton Dunes. The dunes are part of a National Nature Reserve where you can look out for a variety of coastal birds and the natterjack toad.
A few miles to the west you'll find the splendid How Hill. This fine old house includes a nature reserve, tea rooms, beautiful gardens and riverside paths along the River Ant. Near here there's the village of Horning where there are some nice footpaths around the Bure Marshes Nature Reserve, a fine riverside pub and a foot ferry service to take you over the Bure.
For more walking ideas in the area see the Norfolk Broads Walks page.

Potter Heigham village sign. Viewed facing the River Thurne. The village sign has a different scene on each of its two faces.

Medieval bridge over the River Thurne just south of Potter Heigham. This old stone bridge is believed to date from 1385; it is famous for being the most difficult to navigate in the Broads: its opening is so narrow that only small craft can pass through it, and then only at low water

Helter-Skelter house. Named the Dutch Tutch, this house is a helter-skelter from the Britannia Pier at Great Yarmouth - the bottom section is the house, and the top is used as a shed (behind). It was the first residential building on this stretch of the river, and lies on the north/west bank of the Thurne, downstream from Potter Heigham bridge 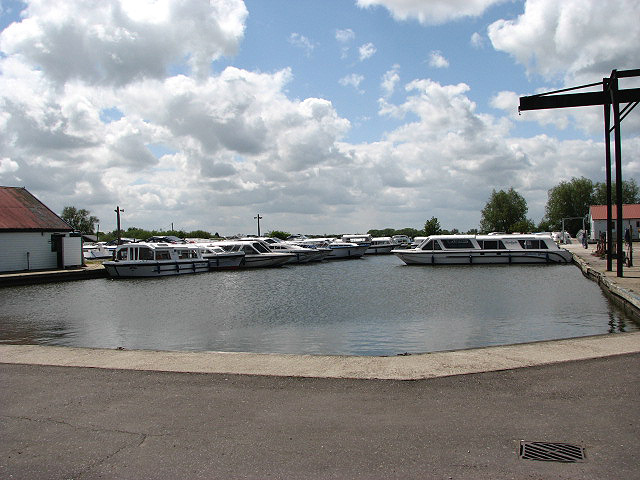 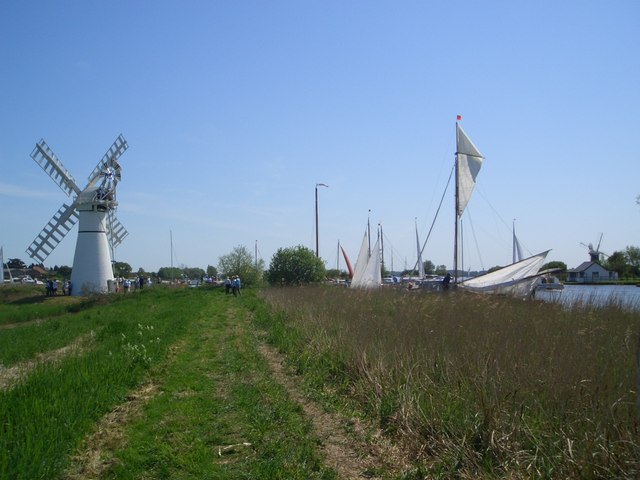 Drainage Mills Thurne. (Morse's) Mill on the left and St Benet's Level Mill on the right. The mast of the restored wherry, Maud, moored on the River Thurne in the centre, and Horning Sailing Club vessels holding a race 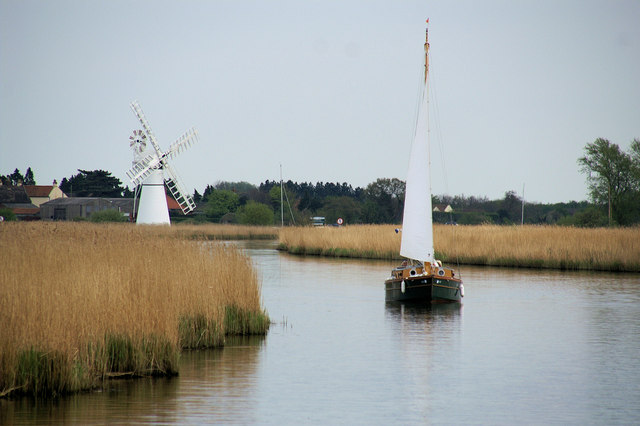 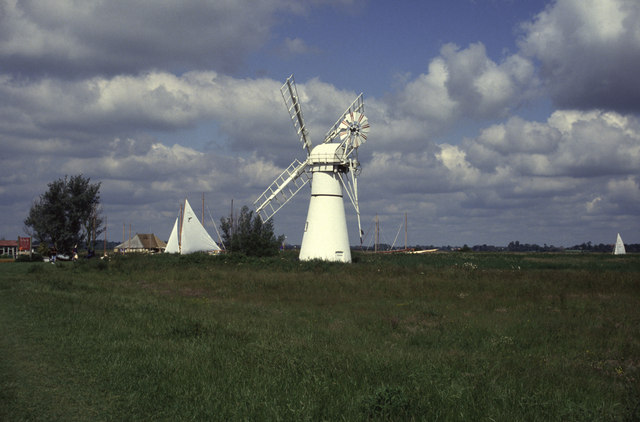