This village in Norfolk has lovely coastal walking trails, a wonderful dune based nature reserve and some gorgeous local broads and meres to visit. The village itself is also very pretty with delightful cottages, unusual roundhouses and a fine 17th century pub to visit.
This circular walk from the village takes you along the beach to the nearby Horsey Windpump and Horsey Mere. You'll also visit the picturesque Martham Broad where there's a nature reserve and good birdwatching opportunities.
The walk starts in the public car park on the beach at Winterton. From here you can follow footpaths heading north through the Winterton Dunes. The dunes are part of a National Nature Reserve where you can look out for a variety of coastal birds and the natterjack toad. You can follow a path through the dunes to Bramble Hill and Horsey Gap. Here you leave the coast to follow footpaths south west to Horsey Windpump and Horsey Mere. You can climb the mill and enjoy fabulous views over the mere and surrounding broads.
After exploring the mere the route heads south from the mill to the Hundred Stream before coming to Martham Broad and the mill near the village of West Somerton. From here you follow footpaths east to East Somerton where you'll pass the remains of St Mary's church. Shortly after you return to Winterton on Sea where the route finishes.

NR29 4DD - Please note: Postcode may be approximate for some rural locations

Head into the village and you can visit the Fishermans Return for some post walk refreshments. The inn has some history, dating all the way back to the 17th century. There's a cosy interior with log fires and local memorabilia. They have a good menu and an outdoor area for warmer days. The pub is located just a short stroll from the beach front car park at postcode NR29 4BN for your sat navs.

The beach, coastal paths and the countryside trails make for a fine dog walk. The Fishermans Return mentioned above is also very dog friendly.

Just to the north west of the village you'll find the splendid Hickling Broad. It's the largest of the Broads and a fantastic area for birdwatching with several species to look out for on the water. In the village of Hickling you can also pick up the Weavers' Way. This waymarked long distance footpath takes you to several of the highlights of the Norfolk Broads.
Just west of the village you can pick up the Potter Heigham Walk. The historic village includes River Walks along the Thurne river, a mediaeval bridge and the Church of St Nicholas which dates from the 12th century.
If you head north along the coast path from Horsey Mere you could visit Sea Palling, Eccles on Sea and the worthy village of Happisburgh. There's a lovely secluded beach, a striking 18th century lighthouse and a historic 15th century church to see here.
If you head south you can visit Hemsby and then stroll down to Ormesby Broad. The Ormesby Broad Walk visits the broad and includes a couple of fine waterside eateries. Fleggburgh and Filby Broad are also in this area.
A little further along the coast there's Caister on Sea and one of the highlights of the area at Breydon Water, near Great Yarmouth.
For more walking ideas in the area see the Norfolk Broads Walks page.

Winterton Beach at low tide. The coastline at Winterton is historically known to be one of the most hazardous parts of the British coastline. On visiting Winterton-on-Sea in 1722, Daniel Defoe commented that all the houses of the village were constructed from the timbers of wrecked ships. In order to stabilise the coastline against erosion marram grass was planted and by the early 19th century dunes had built up, forming a barrier between the high water mark and the ridge on which the lighthouse stands. During the second half of the 20th century the coastline has again changed in that some of the dunes eroded. The area is mostly situated at approximately sea level and erosion and flooding are constant potential risks to the village.

Winterton Dunes Nature Reserve.
Look out for natterjack toads breeding in the reserve's shallow pools and dark green fritillary and grayling butterflies. The reserve is unusual in that it shows greater ecological similarities to the dune systems of the Baltic - which support acidic plant communities - rather than the dunes on the North Norfolk Coast - where the sand is calcareous.
The site supports well developed areas of dune heath, wet 'slacks' between dunes and dune grassland which grades into grazing marsh and birch woodland.
The sand dunes are interspersed by peaty areas, where heather and reindeer moss can be found growing in abundance.

View towards Winterton Ness. Some of the much damaged groynes can be seen in the background (in adjacent grid square); in the far distance, the offshore windfarm by Caister-on-Sea can just be glimpsed on the horizon. 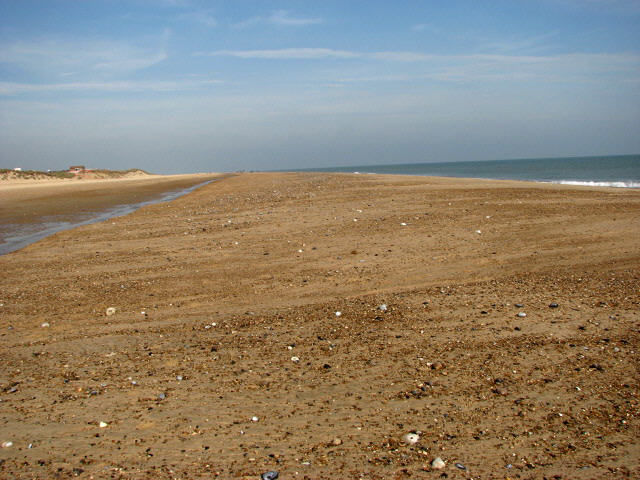 View from sandbank. The Beach Café and Coastguard Station can be glimpsed on the horizon (at left). The view is towards the north; the image was taken from a long sandbank exposed by the low tide. In the opposite direction there is a view towards Hemsby. 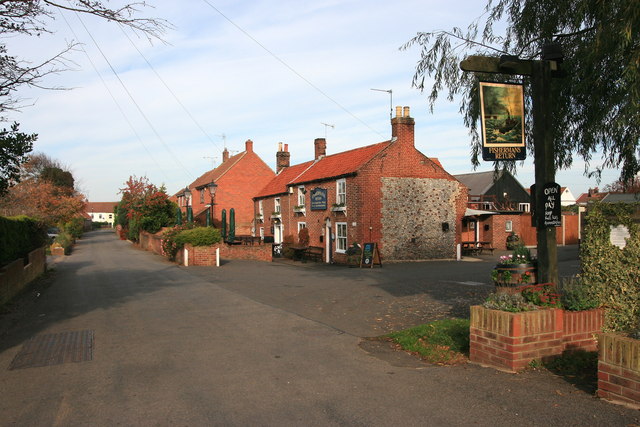 A view of The Fishermans Return, Winterton village. 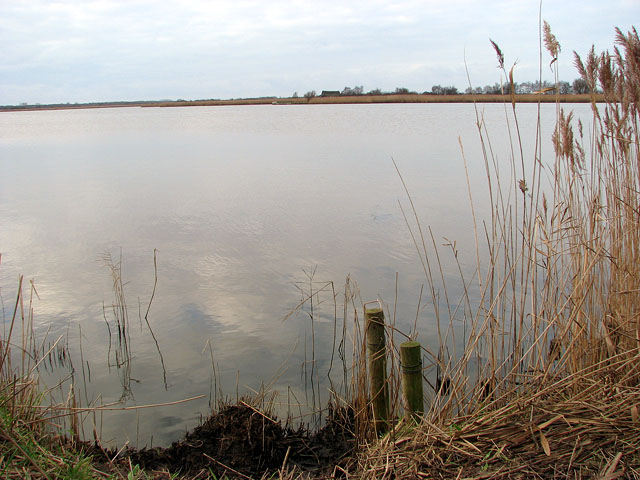 A view of Horsey Mere, a few miles north west of the villages. This view towards the northeastern edge of the mere was taken from the viewpoint at its southeastern edge. Horsey Mere is the only broad in Norfolk surrounded by a high level bank for which reason it is called a mere, rather than a broad. The term 'mere' originates from an old Dutch word meaning an artificial lake. The mere is part of the Broads national park area, and the Horsey Estate is part of the Norfolk Coast Area of Outstanding Natural Beauty (AONB). Horsey Estate was purchased by the National Trust from the Buxton family in 1948. The Buxton family still manage the estate in partnership with the National Trust and it is thanks to the fact that nature conservation has always been a priority for the Buxtons that Horsey remains an important place for wildlife. In winter Horsey Mere is an internationally important wildfowl refuge and home to thousands of ducks including teal, wigeon and pochard. 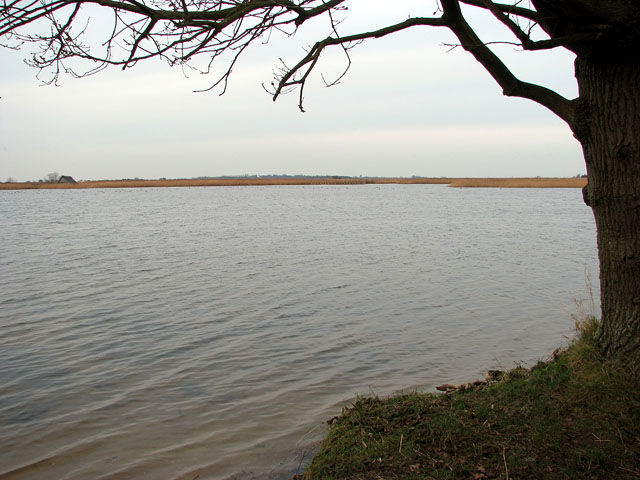 View across Martham Broad. Martham Broad National Nature Reserve forms part of the Upper Thurne Broads and Marshes SSSI and is owned and managed by Norfolk Wildlife Trust. The reserve consists of open shallow brackish water surrounded by reeds and sedge fens and is believed to have been created by the flooding of peat bogs prior to the 13th century. Due to its excellent water quality, the broad has one of the most diverse assemblages of aquatic plants in Broadland. The surrounding reed swamp is composed of common reed and commercial sedge beds.