This picturesque canalside village is a lovely place to explore on foot. The village is notable for its run of 15 locks, designed by Thomas Telford, which raise the canal from the Cheshire Plain to the higher Shropshire Plain. The settlement also includes the 17th century Moss Hall, the fine Audlem Mill, a popular waterside pub and views of the River Weaver on the western side.
This walk from the village takes you south to Adderley along a section of the Shropshire Union Canal. It's a lovely section of the canal with a series of locks and some attractive countryside to see.
The walk starts on the canal in the village near to the historic Audlem Mill which dates from 1916. You can pick up the towpath here and head south to Coxbank before coming to Adderley. Here you leave the canal to visit the village before retracing your steps to Audlem.

The Shroppie Fly is in a great location next to the canal. The pub was converted from a canal warehouse, built in 1916, which was once owned by the Liverpool & Birmingham Canal Company. The distinctive crane outside the pub came from the former Audlem station goods-yard, on the Nantwich-Market Drayton-Wellington branch of the Great Western, which closed in 1967. At the inn you can sit outside with a drink and watch the boats going through Audlem locks. You can find them at Audlem Wharf, Shropshire Street with a postcode of CW3 0DX for your sat navs.

The waterside paths make for a good dog walk and the Shroppie Fly mentioned above is also dog friendly.

To extend the walk continue south along the towpath to visit Market Drayton.
To the west there's the noteworthy Comber Mere. The 12th century abbey includes a large lake and bluebell woodland which is open to the public on certain open days.
For more walking ideas in the area see the Cheshire Walks page.

Audlem Locks No 4, Shropshire Union Canal, Cheshire. The concrete storage structure for stop-planks and the little building on the non towpath side of the lock are extra features

Audlem Mill. The Mill is known locally as Kingbur Mill and was built around 1916 (rather later than most early industrial buildings served by canal). It was always a corn and animal feed mill, and operated until the late 1960s or early 1970s. This red brick old building by the Shropshire Union Canal is now a craft studio and shop.

The Shroppie Fly at Audlem. This canalside "theme" pub, formerly a warehouse, is very popular for ale, food, and music, especially in the summer boating season. 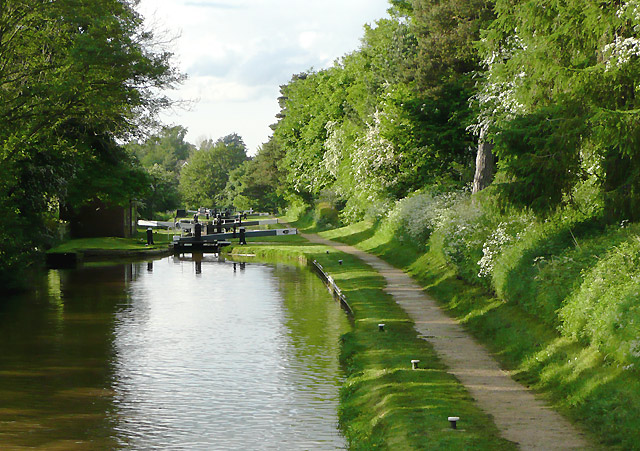 Audlem Locks, Shropshire Union Canal. This image shows the pound below the ninth lock, looking towards Lock No 10. The fifteen locks at Audlem alter the water level by a total of 93 feet, (about 28.4 metres) in one and three quarter miles (or 2.8 kilometres). The canal was fully opened in 1835, engineered by Thomas Telford, and is 66.5 miles in length. It was originally called the Birmingham and Liverpool Junction Canal. 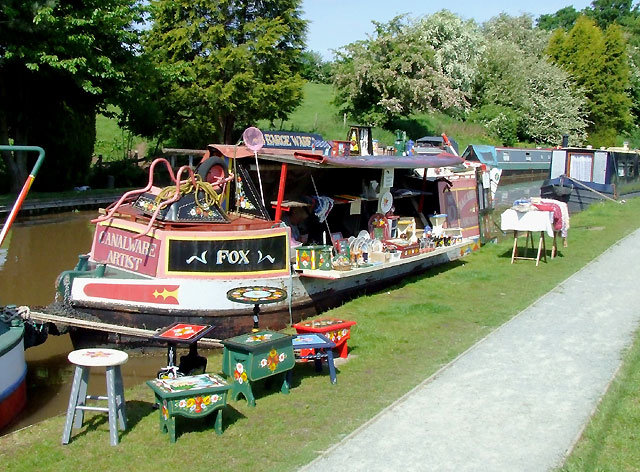 Canalware sales boat. All sorts of things can be bought from licensed traders on the canal system. This was the spring bank holiday ad the Audlem Festival was on, so there were plenty of people about later in the day to enjoy live music in all the pubs (and outdoors too).

Pasture by Moss Hall at Audlem, Cheshire. Seen from the towpath side of the Shropshire Union Canal south of the Weaver Aqueduct, with telephoto assistance.

Narrowboat leaving Adderley Bottom Lock, Shropshire. On the Shropshire Union Canal, there are five locks in the flight at Adderley. These raise or lower the water level by thirty-one feet ( about nine and a half metres) within a distance of about five hundred metres.