This wonderful nature reserve near Southport has lots of nice footpaths to follow around the wetland habitat. There's a huge variety of wildlife to look out for in the reserve. Highlights include the flamingo shelter, otter enclosure and beaver enclosure. There's also a canoe safari where you can paddle throught the reedbeds and look out for water voles to reed buntings.
The Wild Walk takes you along a maze of wetland tracks with wooldand, a web bridge, sculptures and lots of wildlife too look out for.
As well as the large mere there are a series of smaller lakes with many water loving birds to see. These include Goldeneye, Avocets, Pintail Ducks and Crested crane. There's also lots of interesting flora to see with marsh orchids, purple ramping fumitory and golden dock.
The reserve has a large car park but you can also visit using public transport. New Lane and Burscough Bridge train stations are close by. Rufford station is a little further away but if you come from there you can visit Rufford Old Hall and Mere Sands Wood nature reserve before coming to Martin Mere. The 16th century old hall has some nice gardens and grounds to explore.
If you are coming by bike then regional cycle route 91 of the Lancashire cycleway runs past the reserve on Marsh Moss Lane and Fish Lane. You can follow the cycleway from Chorley or Leyland via Bretherton.
To further extend your walking in the area you could pick up the Leeds and Liverpool Canal towpath or enjoy a stroll along the River Douglas.
Just to the north is the lovely Mere Sands Wood Nature Reserve where you will find 100 acres of lakes, broadleaved and conifer woodland, wet meadows and heaths.

L40 0TA - Please note: Postcode may be approximate for some rural locations

Wildfowl on the Mere at Martin Mere. Southport's gasometer can be seen left of centre in the distance. 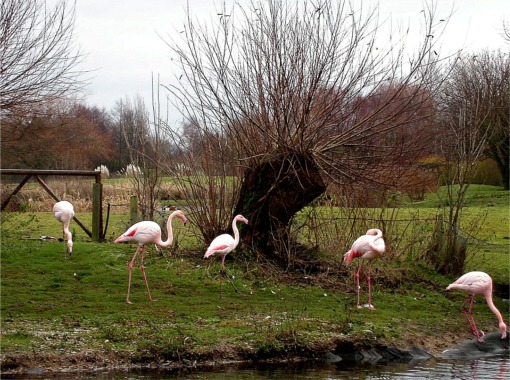 Flamingos. The pink hue of the birds is really set off against the dark winter surroundings. 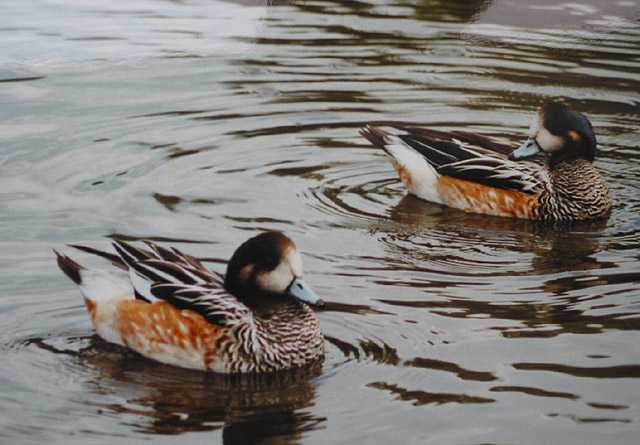 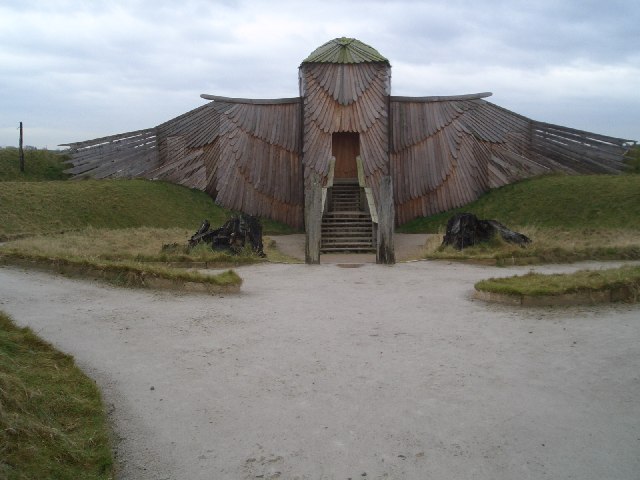 Friends of WWT Martin Mere Harrier Hide. This Hide provides a good view over the Woodend Wetlands. These wetlands, formerly Woodend Farm, were used for intensive crop cultivation, this has been turned into a wetland area. 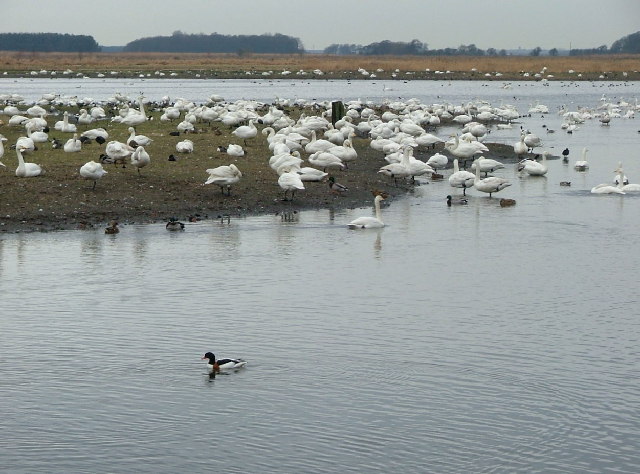 Whooper Swan on the Mere. 1,260 Whooper Swans and 4,800 Pink-footed geese roosting on site as well as over 1,000 Mallard, Teal and Shelduck. The seasonally flooded wetlands enjoy SSSI/SPA and Ramsar status.

Greylag geese. Part of a feral population which is in Lancashire all year.

Bird feeders. Slightly away from the main focus of attention on the area of the mere and the wildfowl collections are these feeders and a small pond - just visible on the right.