Starting at the Source of the Thames at Thames Head in Gloucestershire, follow the iconic river through beautiful countryside and historic towns to the city of London.
The path runs for 184 miles running alongside the river for nearly the whole route making for a glorious experience whatever time of year.
Highlights on the route include the stunning , Windsor Great Park, Hampton Court Park and Kew Gardens.
For more GPS data for this route, including accomodation ideas and attractions along the route please clickhere

The Swan Inn at Streatley is a great place to stop for refreshments. The inn has outdoor seating with lovely views of the river. You can cross the river here and visit the pretty village of Goring to.
Don't miss the noteworthy Perch Inn in Binsey for some well earned refreshments. The thatched 17th-century country inn is one of the oldest pubs in Oxford. It has a great menu and a splendid, large garden to sit out and relax in during the warmer months. Notably, the pub was a frequent haunt of Inspector Morse from the famous ITV series of the 80s and 90s. You can find it on Binsey Lane at postcode OX2 0NG.
The Riverside Restaurant in Marlow is in a lovely location. There's a fine outdoor terrace which is ideal for warmer days. You can find it right next to Marlow Bridge at a postcode of SL7 1RG for your sat navs.
The Two Brewers is also located near the river in Marlow. The 18th century pub does great food and also has a nice beer garden. You can find it on St. Peter Street at postcode SL7 1NQ.
The 12th century Olde Bell Inn in Hurley is one of the most significant pubs in the country. It is claimed to be the oldest hotel in the UK, and one of the oldest hotels in the world. The hotel is said to contain a secret tunnel leading to the village priory, which was used by John Lovelace, who was involved in the Glorious Revolution to overthrow King James II in the 17th century. The hotel was also used as a meeting point for Winston Churchill and Dwight D. Eisenhower during World War II. It's well worth exploring the whole site as other features include a kitchen garden, wildflower garden and a 16th century Tithe Barn. The inn is located close to Pinewood Studios and over the years, has seen a number of movie-star guests, including Mae West, Greta Garbo, Cary Grant, Errol Flynn, Elizabeth Taylor and Richard Burton.
A pit stop at the beautiful Caversham Court Gardens in Reading is highly recommended. Here you'll find the delightful Tea Kiosk within the grounds. They have some delicious home made cakes and an outdoor seating area with views over the gardens and the river. The friendly little cafe also provides support for local charities so it's an ideal place to stop off for a rest and a bite to eat.
At the village of Bourne End there's the quirky Bounty to consider. The interior has a charming nautical theme with a boat-shaped bar and other memorabilia. Outside there's a nice riverside garden area where you can enjoy refreshments while watching the boats go by. You can find them on the Cockmarsh, just south of the village at postcode SL8 5RG.
In Old Shepperton The King's Head is worth a look. The pub has some history, dating all the way back to the 15th century.  It was originally a coaching inn with the top bar being stables. They have a recently restored interior retaining much of the original charm of the old pub. On the walls you can see photos of several famous people who have visited the pub due to its proximity to Shepperton Film Studios. These include Richard Burton and Elizabeth Taylor who were regular visitors. You can find them at postcode TW17 9JY for your sat navs.
In Berkshire's Sonning The Mill at Sonning is an establishment of some note. This lovely Dinner Theatre and bar is set in a converted 18th century flour mill on the banks of the river. The acclaimed site is notable as as the only dinner theatre in the United Kingdom. It includes a restaurant and bar area with a spinning waterwheel. Here you can enjoy Artisan Coffee, Homemade Cakes, a range of Sandwiches and delicious Hot Bar Food. You can find them at postcode RG4 6TY for your sat navs. 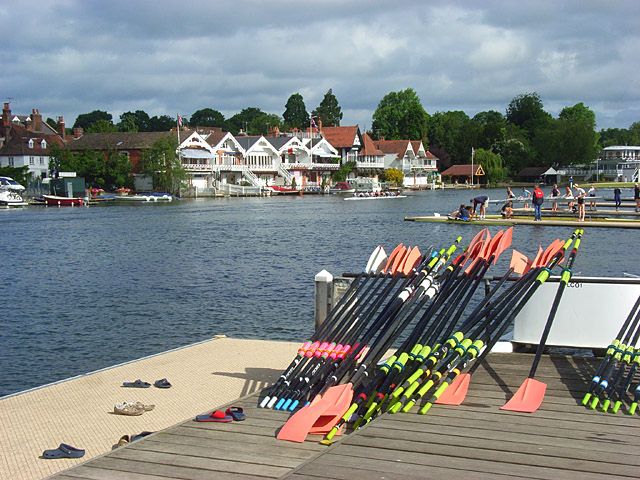 The River Thames, Henley. The scene ahead of the Regatta. Looking across to Henley from Remenham. 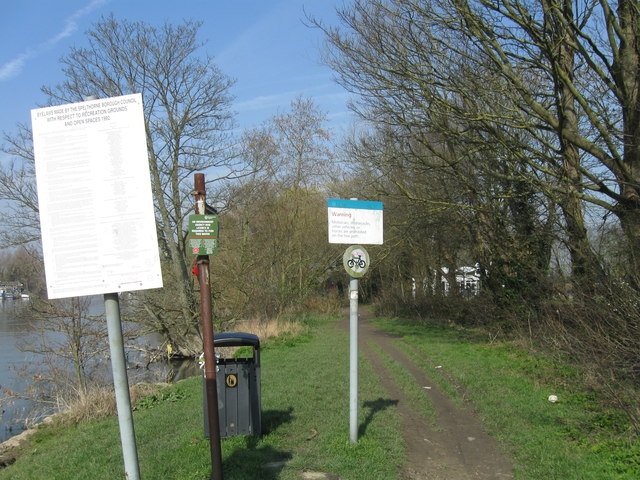