This circular walk from Hemel Hempstead explores the countryside to the east of the town, skirting the edge of the Chilterns Hills. On the way you'll enjoy waterside paths along the Grand Union Canal to Berkhamsted before exploring the woodland on Berkhamsted Common. The walk makes use of two of the waymarked footpaths which run through the area - the Grand Union Canal Walk and the Chiltern Way.
The walk starts on the canal just to the south of the town centre at Two Waters. From here you can follow the towpath west through Boxmoor where there is a lock, weir and views over the River Bulbourne. The route continues to Berkhamsted where you will pass the ruins of the noteworthy Berkhamsted Castle. The Norman motte-and-bailey castle was built to obtain control of a key route between London and the Midlands during the Norman conquest of England in the 11th century.
At Dudswell the route leaves the canal to pick up the Icknield Way Path, following it north east to Norcott Hill. Here you follow bridleways onto the expansive Berkhamsted Common. The area is made up of attractive Silver birch woodland and gorsey heath with miles of ancient tracks to follow.
After passing through the common the route continues through Potten End before turning south east through the outskirts of Hemel Hempstead to return to the canal. It is then a short walk back to the town centre.
Part of this route skirts the edge of the Ashridge Estate which is a great place for walkers. You can follow the waymarked Ashridge Boundary Trail to explore the acres of woods and common land.

If you follow the canal south you'll some come to the neighbouring village of Kings Langley where there's a 14th century church, a local common and some pretty locks and weirs along the canal.
To the south west there's a series of nice trails across the picturesque Chipperfield Common.
For more walking ideas in the area see the Hertfordshire Walks and Chilterns Walks pages.

Grand Union Canal, Boxmoor Bottom Lock, about 100 metres upstream of the confluence with the River Gade.

River Bulbourne In Two Waters, Hemel Hempstead, upstream of the confluence with the River Gade, and viewed looking upstream.

Berkhamsted castle walls, showing the moat on the right and the keep in the left background 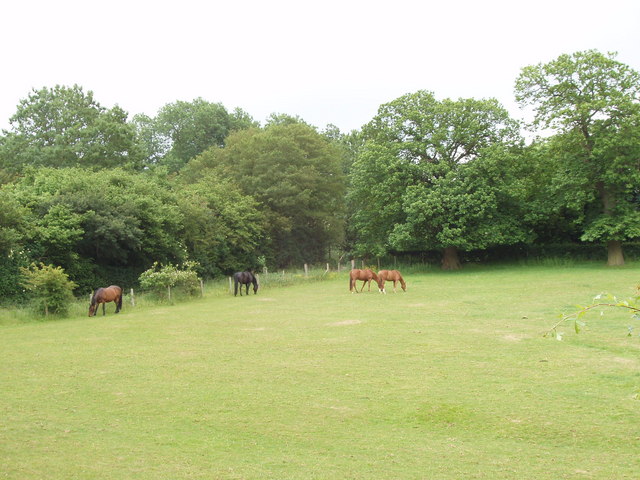 Paddock with horses, by Berkhamsted Common. View from footpath near Well Farm 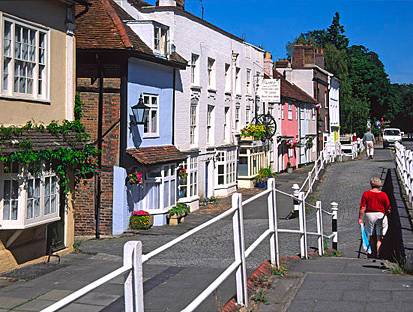