This walk follows a section of the Chesterfield Canal from Worksop to Kiveton Park.
The walk runs for just under 6 miles along the flat towpath, with the option of catching the train back at the end of the route.
The walk starts on the bridge over the canal just to the south of Worksop train station. From here you can pick up the towpath and follow it west past Sandhill Lake to Shireoaks where there's a prety marina. Here you can take a short detour from the canal to visit the 17th century Shireoaks Hall which is just to the south of the marina. Near here you could also stop for refreshments at the Hewett Arms pub in the village. The pub is situated on the outskirts of the village close to a fishing lake and includes a nice beer garden.
After passing Shireoaks the route continues west past a series of woods before coming to Kiveton Park. Here you can catch the train back to Worksop.
You could extend the walk by continuing along the canal to Rother Valley Country Park where there's some nice trails around the pretty lakes. Harthill Reservoir and Pebley Reservoir are also located just east of here.
Just to the south of Worksop there's the wonderful Clumber Park. There's 3,800 acres of woodland, open heath and rolling farmland to explore here.

If you head east along the canal it will take you to Ranby and the interesting market town of Retford. In the town there's fine Georgian buildings, a spacious square and the interesting Mayflower Trail. On the trail you can learn about the Pilgrim Fathers, who originated from villages of Babworth and Scrooby on the outskirts of East Retford between 1586 and 1605. There's also the Mayflower Pilgrims Visitor Centre to visit here.
A few miles north of the town there's some more waterside trails around the pretty Langold Lake Country Park. The 300 acre park includes woodland, a nature reserve and a water park.
For more walking ideas in the area see the Nottinghamshire Walks page.

Lock and cottage near the marina at Shireoaks

Kiveton Park. The winding hole (turning point) near the current limit of navigation of the Chesterfield Canal. 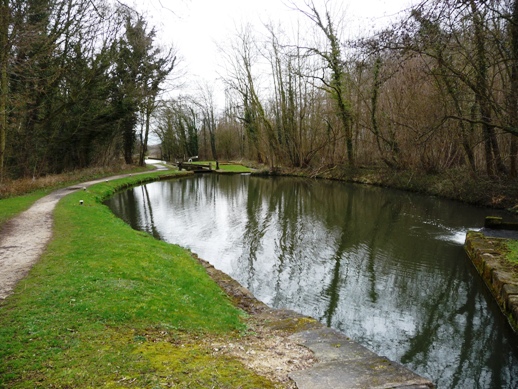 Black and white photo of Turnerwood Lock No 34

Cinderhill Lock No 41, on a frosty winter day